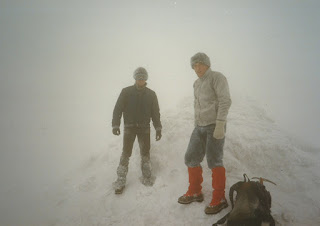 Some years ago I ice-climbed as a hobby, with my friend, Andy. One time we climbed Ben Nevis. One side of the mountain is a reasonably easy ramble, however the other side has a number of quite difficult rock and ice-climbs. We were on Tower Gully.We both had crampons and an ice ax each. No ropes as it was a grade 1/2 and the main difficulty was the cornice, an overhang of ice, at the top, which we would have to dig through.

I initially found the climb easy and exhilarating. That soon stopped.

I think we are all afraid of heights as I soon discovered. My friend was above and he hit a patch of water ice. That is ice that is very hard and it shatters when you hit it with an ax. He called down and suggested we retreat and then move across sideways and try and go around the water ice.

I looked between my legs as I descended and that was terrifying. The climb is two thousand feet and looking down was horrible. Talk about disco knee. We descended and then went sideways and resumed the climb. We could hear cracks as somewhere on the mountain ice and/or snow fell. I wouldn't say avalanche as that would be too dramatic, but it was unnerving, nevertheless.

At some point a flake of ice or snow landed in my eye. I blinked and out popped my hard contact lens. Andy asked why I had stopped and I said I had lost my lens. Exasperated he said to carry on. Amazingly I saw the lens. It had frozen to the surface in front of me. Putting my arm through the loop of my ax I managed to reinsert my lens.

We eventually got to the cornice. There was a ledge beneath it and I sat on that whilst Andy used my ax to hang on and his to dig through the overhang. Sitting on the ledge was horrible.The view was amazing but I was conscious of the weight of ice above me and the frop below. It was too easy for the ice to give way. Andy was also in danger as a cornice could collapse and carry him away. With my ax!

He succeeded and together we gained the summit. One hell of an experience and very exciting.

Anyone else lost and recovered a lens in bizarre circumstances? The photo is of me and Andy on top of a Munro. Not sure which though but clearly a white-out. Camera on timer given there were just the two of us.