Download Drachar's Demons FREE and read believable fantasy by David and Andrew Burrows. A great tale that will hold you spellbound to the very last page. Download either Nook (Barnes Noble), i tunes, Kindle (Smashwords) or in Kobo format. (Tell Amazon it is free on these sites and Amazon may make their Kindle edition free.) 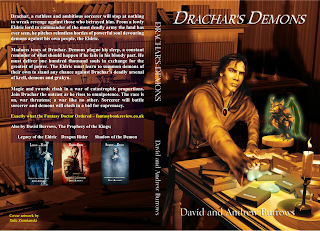 Drachar is a ruthless and ambitious sorcerer who will stop at nothing to wreak revenge against those who betrayed him. From a lowly, although arrogant Eldric lord to commander of the most deadly army the land has ever seen, he pitches relentless hordes of powerful soul devouring demons against his own people, the Eldric.

Fierce battle is to commence and all in its path must fight or risk their soul being sent screaming from their twitching corpses. Madness tears at Drachar, a constant reminder of what should happen if he fails in his bloody pact; delivering one hundred thousand souls to the demons in exchange for the greatest of power. The Eldric must learn to summon demons of their own to stand any chance against Drachar’s deadly arsenal of krell, demons and grakyn.

Magic and swords clash together in a war of such catastrophic proportions that the world will be forever stricken. Join Drachar the outcast as he rises to omnipotence. The die are cast and events are set in motion that look set to destroy the world.

The race is on for war threatens; a war like no other for sorcerer will battle sorcerer and demon set against demon.