Great Ending to the Trilogy: Wings of the Storm by Giles Kristian

Wings of the Storm by Giles Kristian
My rating: 5 of 5 stars

Great fun throughout and the ending certainly impresses. There are some nice twists to the plot and how Sigurd builds his army is great fun. The author has a devious mind. I really enjoyed the series and the description of the period felt very real. Life was hard and those that went Viking, raiding, certainly lived on a knife edge. It was very easy to raid poor farmers at little cost to life and limb, but the rewards were clearly limited, so Vikings had to aim higher. This comes across very well in this tale and I particularly liked it when Sigurd's crew raided a poor farmstead and then ended up defending him against a more malevolent crew.

The ending is not clear cut and the fighting is very hard which makes for a good tale.

Winter's Fire by Giles Kristian
My rating: 4 of 5 stars

Book 1 ended with Sigurd's depleted crew having achieved a significant aim in their quest for vengeance. There are some really good characters in this novel and they all seem to have a part to play. The period comes alive with a very imaginative description of Viking times. Some readers have complained about the fight sequences being unrealistic in that bodies cannot be cut in half but forget that, the battle scenes are highly enjoyable and leave you on the edge of your seat. I have handled a Dane axe and have watched documentary programmes about these, and they can do serious damage, however, the period is a little early for these monsters of destruction.

Sigurd gets into many scrapes and manages to get out of these by being Odin favoured. The nice thing about that is it is just words, but Sigurd unsettles his enemy just by the stating he is Odin favoured and the more scrapes he survives the bigger the legend. Sigurd goes to extremes to ensure his reputation as being Odin favoured is increased.

The tale is a little slow to start with and then progresses nicely. This is fun writing and great tale.

God of Vengeance by Giles Kristian
My rating: 4 of 5 stars

If you are short of fantasy to read then is a cracker of a substitute. Plenty of action, sword and axes galore. Well written with an easy to read narrative. I really enjoyed this tale. Book 1 is full of woe and everything goes wrong in Sigurd's life and he swears vengeance against a King and a Jarl (Danish chief) for the betrayal of his father and clan. The description is very grim and bloody with a lot of action followed by a relatively slow period. The writing style is sufficiently good to keep the reader engaged. The author's knowledge of the period is good enough to give a convincing read. The Vikings are driven by Odin/Thor to the exclusion of all else. That may be unrealistic in normal life but with the blood oath it certainly makes a good read. Great fun.

For many years I was a Saxon/Viking re-enactor in Regia Anglorum https://regia.org/. This has really helped my fantasy writing. It gave me first hand experiences of using a sword, spear, bow, shield etc. All our weapons were metal and weighed the same as weapons from the period. We weren't seriously injured, but I did get fractured fingers and cracked my ribs twice so it wasn't for the faint-hearted.

One of the most useful experiences was fighting in all the armour of a Saxon warrior. Chain mail is heavy and weighs about 40 lb. With the helmet, shield and other accouterments it certainly adds up and on a hot summers day it can be very daunting. A padded jacket (gambeson) is worn beneath the armour otherwise you feel every blow. The gambeson absorbs much of the shock and prevents the chain mail links jabbing into flesh which would seriously hurt. The downside of a gambeson is that you heat up even more in battle. Being several layers of wool, you don't half sweat.

With all this weight and heat, men fighting in armour need to be rotated out of the front line fighting to rest. This is very hard to do in the heat of battle and would normally happen between clashes, should that happen. Shields add to the burden and are also used as a weapon. Inadvertently, in my training days, my shield was occasionally shoved into my face and that hurts. In battle this would have been deliberate. A shield clash in itself is very scary and can break a defensive position.

Rarely was anyone bloodied in our fighting and that has to come from imagination. Someone once pointed out that cutting an artery causes blood to spurt, so spears/swords, axes would have caused horrific injuries and the air would have been filled with a fine mist of blood. Having bitten my tongue I know the taste of blood and it is often described as metallic in taste Imagine, then, the air literally filled with a fine mist. It must have been truly awful. Tales of King Arthur and his knight portray a noble fighting which is very far from reality. Add the screams of wounded and dying men and a battle must have been a dreadful experience.

I have also faced a cavalry charge. The horses were meant to stop in front of our shield wall, but one horse skidded and hit a man in the line. The horse's momentum propelled the unfortunate man about twenty feet backwards through the air...and that was unintentional! If the charge had been maintained then people would have been smashed from the line and bodies flung far and wide. Horses won't naturally charge a line of people but spurs raking their flesh and a compact line of horses will break a shield wall.

I have also faced archers and that is not a threat...initially. Arrows fired into the air can be countered by a raised shield. However, in the chaos of battle with spears coming at you from any direction, the threat from cavalry etc an archer can be overlooked. Archers were to be feared and in later battles when the bow draw strength was typically 100 lb and with a bodkin tip, armour and shield were no longer proof against an arrow.

A further issue I had not considered was how hard it is to kill a man in armour. Many of the skeletons discovered from graves near battle sites show wounds on their arms. It often took many blows to kill a person and broken bones were just as likely to kill given swords rarely punctured mail. Fighting was a hacking process with perhaps little finesse. The advent of the mace was exactly this, a weapon to smash bones.

Fortunately for us, once the battle was ended, there was a call for "Dead Arise" so we managed to survive each and every battle. I pity the poor unfortunates that didn't. 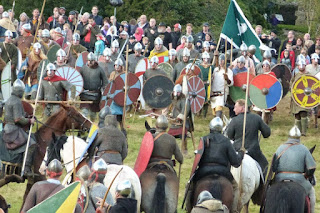