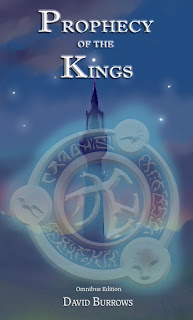 Short but sweet review of Prophecy of the Kings

Excellent Review for Legacy of the Eldric :)

Great review for Legacy of the Eldric. Many thanks. Made my week.
5.0 out of 5 stars An excellent read
ByAmazon Customeron 11 January 2018
Format: Kindle Edition
"I found this book to be an exciting read, and better than The Inheritance Cycle books by Christopher Paolini. In fact, I was more than a little captivated by it and am now coming to the end of the second book in the Prophecy Of The Kings trilogy - Dragon Rider. I'm enjoying the read and escapism so much that I have bought all three books for a friend who liked Christopher Paolini's books. She is sure to like these. Well done David Burrows. I think you should write some more please!" Click HERE for review. 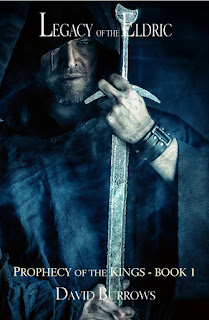 Many articles advise authors to write about what they know, and I am a firm believer in this. However, writing fantasy books can make this challenging. For example, how many of us have ever ridden a dragon or fought in a shield wall? So how does writing from life experiences help the tale? It is because of the realism this adds. This is very important especially in fantasy writing. Imagination is also hugely important, but by adding a sense of realism, wherever you can, this makes the fantasy aspects seem less surreal.

So what aspects of life did I pick, to aid my writing? I have been very fortunate to have had lots of hobbies, including mountaineering, camping, the territorial army, ice climbing, rock climbing, scuba diving, Saxon/Viking re-enactment, gliding and some I have probably forgotten about. So how do these help my writing? In part 1 I focus on how mountaineering has helped my writing.

I have spent many a weekend on snow-capped mountains, freezing half to death. I have been tired, wet and hungry after a long day's march. I have been in a cloud of midges where everyone was choking as the midges were so thick around us that we breathed them in. I have climbed mountains where each false summit was supposed to have been the last and felt the overwhelming despair this creates. However, I have also known the joys of reaching a campsite and washing from a billycan of lukewarm water with a sponge; the feel of grass under tired feet, having removed my boots; reaching a mountain top and seeing the glorious panorama below. It is amazing how much your spirits revive once you are fed and bedded down for the night.

These are the feelings that I tried to impart to my character. The agony of boots chaffing, blisters bursting and blood seeping through the leather. Wet clothes clinging to the body, sucking heat away from my legs. The impossibility of walking on marshland, sinking with every step and the sucking and tugging on boots to escape.

I once camped in the Peak District when it was -30 degrees Celsius - and to make matters worse I forgot my sleeping mat. We spent the evening in a pub, sitting before a roaring fire and drinking pints of ale. Having to go out into the frigid cold was one of the hardiest things I have ever done. I even had to dig snow around the sides of the tent to prevent the wind howling under the fly sheet. To compensate for the lack of a ground mat I took several newspapers from the pub and laid them on the ground. It was still so cold that I struggled to sleep. The following day, despite low spirits and being tired, we still managed to carry on and walk our intended route.

So, when Kaplyn and his friends find themselves climbing Ban Kildor in Legacy of the Eldric, my heart goes out to them. At least I could pack it in and go home to a bath and central heating, but my poor characters were banished to night after night in the wild with only wolves for company and often little to eat.

Authors are very hard on their characters and I sometimes wonder whether we create the world and the characters in which we write. If that is true, then I have a lot of apologising to do.

Prophecy of the Kings - Believable Fantasy by David Burrows
http://davidburrows.org.uk/

For tips on writing a book http://www.writingabook.ninja/2014/06/writing-book-part-1.html
Posted by DavidjB at 16:27 No comments: