Season 1 for me was well...dreadful. It was long winded and dull. However Season 2 is far better. The tale of witchcraft has brought the series alive. This programme had all the hallmarks to be great with vampires, witches, monsters etc. However, Series 1 seemed to lack for a story line. It was as if the produces had thought, as an example -- let's do an episode on possession and the story line was pinched from The Omen. There were dull moments where too much emphasis was placed on convincing the audience about the passage of time.

However, in Season 2 there is much more action. I was worried though, that Frankenstein's female monster would be a rehash of previous tales but so far the tale is developing nicely along its own path. I like the way Frankenstein, Dorian Gray and other notary characters flit in and out of the tale. It's like meeting a long lost friend...or at east an unfriend, as these characters are so mixed up and likely to do you harm.

OK I am well behind most people on these Seasons but if you are like me and uncertain whether it is worth watching, it is worth a try.

Drachar's Demons is available FREE from Nook, KOBO and iTunes. Click on the links below 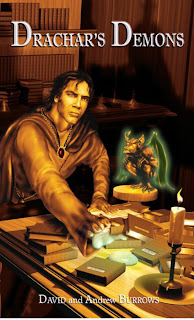 OK, as far as Fantasy films out there this is a bit of hokum, but actually a good fun. The giants are definitely the best bit and quite a bunch of characters there are too. With their manners, you certainly wouldn't want one cooking your dinner; a little too like the trolls in the Hobbit.

It is the usual tale of Jack and the Beanstalk but with some twists. The cast is good on the whole although Ewan McGregor gets a bit annoying after a while with his plum-accent. Eleanor Tomlinson simpers through the role nicely, but her co-star, Jack - Nicholas Hoult, could have been better cast as he comes across too nerdy/whimpy.

As I say, the best bits belong to the giants and it is worth watching just for these. It's a bit like the Minions in steroids and with attitude. Good fun, especially how Jack deals with the giant chieftain. Awesome.

For All Those Detectorists Out There.

“Why are you crying, Guthrum?” Alfrec asked.
Guthrum was a picture of misery, sitting amongst the hedgerow, his knees to his chest. His threadbare tunic damp from his tears.
“Dad is going to kill me,” Guthrum snivelled, wiping his nose with his sleeve.
“I won’t let him,” Alfrec replied and Guthrum choked on a half-sob, half-laugh.
“You are two years younger than me. If Dad beats me half to death how can you help?”
Alfrec looked down, his well-meant intent shining in his eyes. Guthrum regretted his reply and said, “You are brave to offer, but I have to face him myself.”
“What have you done?” Alfrec asked, sitting alongside his brother. The day was warm and the sky clear. It was almost pleasant sitting in the dappled shade.
“He gave me a penny to buy a chicken, but I lost the penny.”
“Where did you lose it?” Alfrec asked.
Guthrum snorted. “If I knew that I wouldn’t be sitting here.” Alfrec cast Guthrum a glance that suggested the reply was unhelpful.
“I had it in my pouch,” Guthrum said. “I stopped when I saw a hare and took out my sling, but the time I had my sling ready the hare had gone.”
“Empty your pouch and let’s check,” Alfrec offered.
Guthrum upended his pouch and his worldly belonging spilled out onto the damp grass.
“What’s that,” Alfrec asked pointing at one object.
“That’s a bat’s wing,” Guthrum said picking it up. “It brings me luck.”
“Well I would get rid of that. It clearly hasn’t helped.” Alfrec said. “No sign of the coin then. Can we steal a chicken?” he suggested hopefully.
“What and have my hand cut off? No thanks. There’s nothing for it, but to face Dad and take a beating as well as I can.”
Alfrec looked down, “You are braver than me. I’d run away before facing him.”
The two boys sat in silence, neither wanting to hurry toward the dreaded encounter.

Jack grinned. “Bloody hell,” he said with a whoop. His detector had given him a faint signal and now a glimmer of silver stood out in stark contrast with the black loamy soil. His fingers scratched at the dirt revealing more of the object.
“What u got,” Kev asked, coming over and laying his own detector down before removing his headphones.
“A hammered, I think.”
“Bloody hell, is right,” Kev said reaching out to take the object which now sat in Jack’s hand. “That’s a Saxon penny.”
Jack stood and promptly started his hammie-dance. “Oh yes! Oh yes!” he chortled as he circled round his friend.
Kev grinned, “Great find, mate. This’ll be find of the month.” Neither men gave a thought to the lad who had lost it and the beating he took from his irate father ad if Guthrum had been alive to see Jack’s hammie-dance, he would have groaned to see such peculiar cavorting by a grown man.

Bernard Knight's The Manor of Death

The Manor of Death by Bernard Knight
My rating: 3 of 5 stars

Very entertaining but very slow. I didn't mind the slow read in some respects at it is a fascinating read and the author conveys 12 century England so very well. The tale (once again) involves boats and sailors, but has an interesting undercurrent from piracy. John de Wolfe is an absolute saint, I would have murdered his wife many times over. I love the tale being centered on Exeter and you can certainly recognise the cathedral and grounds and many of the road names rang a bell.