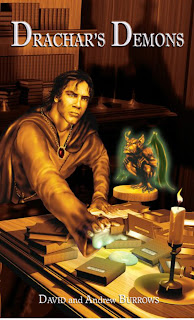 Drachar, banished by his own people, forges an unholy alliance with the demons. They demand one hundred thousand souls and only all out war will deliver so many and Drachar must seek allies. Meanwhile his people, the Eldric, must learn to counter the growing threat. Only the bravest sorcerer dare summon a demon, let alone learn to defeat one for failure will result in their soul eternally damned.

David Burrows is the author of the award winning fantasy trilogy the Prophecy of the Kings (Gold Award 2010 Readersfavorite.com) and the prequel Drachar's Demons. Prophecy of the Kings was also Book of the Month on SFbooks.com. Sample chapters and reviews can be found at David's website http://davidburrows.org.uk/.

David has lived in Blackpool, Liverpool, Edinburgh and he now resides in the garden of England, Kent. He was a Captain in the TA (2/52 Lowland), an experienced mountain climber and more recently has taken part in Saxon/Viking re-enactment. David's fantasy writing has benefited from these real life experiences: hours slogging up and down mountains and fighting in a shield wall and although never maimed or killed, David has broken bones on several occasions, so the fighting at times has felt very real.

As with most aspiring authors, David's writing is part time, with the plots progressing in the evenings and holidays and also during his wife’s pregnancies. At times David's tales seemed to naturally take the characters into extreme peril, and for months he was left wondering as to their fate. Refusing to rewrite the tale to rescue them he patiently waited before inspiration struck and the story continued at a fast pace to the next cliff-hanger. Suffice to say David's two sons have now grown up and, as the quill dries, are of an age to read and appreciate this work and to develop their own writing. As to the characters in David's tales, they too have grown older and wiser; as to whether they survived the tale, only reading the novel will tell.

David hopes you take time to check out his works and enjoy them. http://davidburrows.org.uk/
Posted by DavidjB at 11:39 No comments:

This appeared on y Facebook page. And Facebook want me to pay to place this Ad?? What a bunch of numpties. 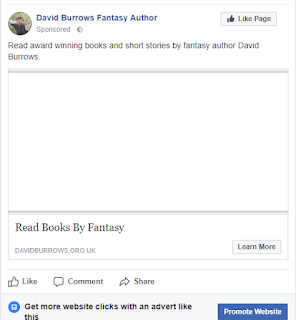 Isn't it rather missing the point? Or at least a picture!
Posted by DavidjB at 12:07 1 comment:

The Poisoned Chalice by Bernard Knight: A Good Read Rather than Excellent

The Poisoned Chalice by Bernard Knight
My rating: 2 of 5 stars

I didn't enjoy this as much as the other books. Perhaps the formula the author uses in his writing is becoming too familiar, or it was simply less of a story compared to the other books. These books are slow reads, but beautifully crafted. The author gets the period spot on with wattle and daub buildings, mud strewn streets, draughty houses and yet warm inns. I have perhaps tired of some of the characters and I think I would have murdered his wife, Matilda, by now. However, John de Wolfe, being the Coroner has his hands tied by law. Once again there is murder and this time rape. John stumbles along and given his previous performance at solving crime, this novel relies on others to solve these ones. The author throws in ordeals, a little bit akin to a history lesson and whereas in other boos this felt part of the plot I did feel myself saying, oh no, not again. Still, a good read rather than excellent.

Dunstan by Conn Iggulden
My rating: 3 of 5 stars

I am a fan of Conn Iggulden, but Dunstan was not up to his usual standards in my opinion. What he gets right is the sense of the period and he has a great ability to do this. You feel transported to the 10th C. This is an amazing period in history with kings coming and going at an alarming rate. The one consistency is Dunstan who starts life in an abbey and through an ability in many skill-sets manages to rise through the clergy. The tale is mainly believable with some action, but focusing more on political intrigue.

What I didn't like was Dunstan himself. Arrogant characters sometimes work but on this occasion he grated. I didn't really care for Dunstan, so felt that I wasn't sufficiently engaged with the character to care whether he lived or not.

It was an enjoyable tale, but I didn't feel compelled to get the next one in the series.

Wars of the Roses: Bloodline by Con Iggulden

Bloodline by Conn Iggulden
My rating: 4 of 5 stars

Another griping read and the battle of Towton was awesome. Edward IV is a great character in this book and Iggulden has a plausible tale for the two kings, Henry VI and Edward clashing. I hadn't realised that both kings were on the throne at the same time and that London had bared its gates against Henry VI. At a time when traitors were hung drawn and quartered this was an incredibly brave thing to do. Iggulden brings history alive. Gone is the dryness of history as taught in school, but with intrigue and murder as a backdrop, his tales are marvelous and vibrant. This period of history is the original Game of Thrones.