I went to Rome recently and loved it (apart from all the walking!!). Ancient Rome is everywhere and for me that has strong links to fantasy writing. With all their gods and superstition, Romans did nothing without consulting an oracle. (Not a job I would like: examining entrails for signs of a diseased liver.) Their gods were a dangerous and self-serving lot, demanding the best sacrifice and huge temples with columns that dwarfed any building that had gone before.

Man finally lost himself in Rome's grandeur and emperors declared themselves gods, perhaps following Egypt's millennium-old example. Nero built a huge statue of himself and unfortunately the Colosseum replaced that. For all their mortal failings, declaring yourself as a god must be the height of power. And folly.

In my books I tried to capture ancient Rome's grandeur and more importantly mystery. In Britain, long after the Roman's departed, people must have looked on in wonder at the ancient remains of amphitheaters, temples and other grand structures. In an age of wooden buildings, Roman ruins must have seemed god-like and may have fired people's imagination. In ancient times, superstition was rife, and the embers of people's fear were likely to be fanned by ancient places dedicated to lost gods.

The Eldric are a race in my books who mysteriously disappeared, leaving behind the ruins of once proud cites. Their civilisation was like Rome's, far above that of the indigenous population. In my books the threat of demons adds to people's superstition and the fear of a demon materialising from the underworld, to seek souls for eternal damnation, is too great to be voiced and like Roman remains, gargoyles and symbols decorate the ruins as wards against evil.

Check out my novels at http://davidburrows.org.uk/ 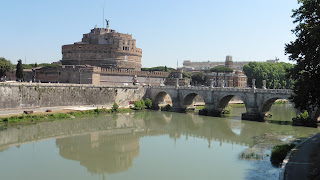 A view across the Tiber: Nero's mausoleum. 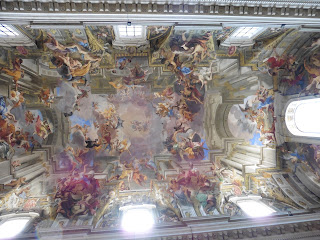 One of the many paintings decorating a church ceiling, Staggering.