That's the sort of luck you don't need. God rest his sole.

I had to re-dig the garden pond recently and I was not sure about what to do with the fish. One of them, a mirror carp, had grown ginormously (for a pond: probably a couple of pounds). He was a lucky fish and had survived the local heron, George. At one point I didn't even know I had this fish as my pond had been emptied by said heron.

After George's last foray, I didn't bother with fish for a while and then had a change of heart. After all, it's nice to wander down the garden and watch the fish. I gave up with carp though and bought goldfish. Each evening, I would feed them and was surprised by a great swirl of water on occasions. After a few months I realised I was seeing a fish' mouth and a big fish at that.

The mirror carp must have survived George's dinner party and it had become very shy. Also, being in an empty pond he had grown to epic proportions. I was very pleased and it was great to watch his occasional forays to the surface for food. However, when I re-dug the pond I didn't know where to put the fish. Then I realised I had a water butt, full of rainwater. That gets around the problem of chlorine n the water and when you fill a pond, it is best to let it stand for a few days and sunlight and time sorts out the chlorine.

So, in the water butt went the fish. Only one night later and the mirror carp was no more. Belly up and in the immortal words of Monty Python, this parrot, I mean mirror carp, was dead. My kids have never let me forget this and quite often quote, "Dad killed the fish."

More ignominiously, I buried the fish in the garden and must have buried it too shallow, as the next day and yes you guessed it, the local fox dug it up and ate it. God rest his sole; pardon the pun :)

A picture of my new stream: Ponds are great fun and harbour lost of wildlife and I'm certain fairies and hobbits often visit :) 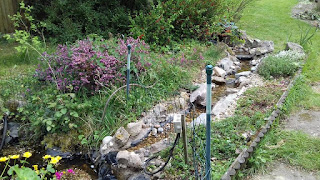