My strangest experience losing a lens was when ice climbing Ben Nevis (Tower Gully). A friend, Andy, and I were climbing late in the season and occasionally you could hear a crack and whoosh as ice broke off. This was a grade 1/2 climb as there was a cornice, overhang of ice, at the top which we had to dig through.

I wasn't very experienced at climbing, but initially everything was great. I don't like heights, but the crampons and ice-ax made me feel secure and we climbed steadily for 30-40 minutes. I was wearing gas-permeable contact lenses and blinked just as some ice went in my eye and...pop...out went a lens.

"Hold on,Andy," I said. "I've lost a lens." Andy was above me and he dutifully stopped.

"You've lost it," he grumbled, pragmatically. "no chance of finding it now." He was from Yorkshire so a man of few words. We were, at this point, on a very steep slope (70 degrees) about one thousand feet above the ground. He was probably right, but as contact lens wearers are aware, lenses are too expensive to lose.

Looking around the slope I spotted the lens almost immediately to my front. It seemed glued to the ice and small particles of snow were being blown across the surface. I was terrified the lens would also blow away, but watching the small grains being blown over the surface was quite hypnotic. Fortunately, the lens was grey (the right lens is often grey to differentiate left (clear) from right) so it actually showed up quite well against the blue/white ice background. I looped my arm through the strap of the ice-ax which was reasonably anchored in the ice, took off my mitt and carefully extracted lens from surface, realising that it had actually frozen to the surface. Wow, incredibly lucky and saving me nearly £100. I put the lens back in and was ready for the climb.

Higher up and Andy yelled down that he had hit water-ice. This makes climbing very tough as the ice shatters when you strike with the ax which barely forms contact and certainly not enough to trust your weight to. We had to descend with the plan being to traverse across the slope and try again. This was awful. Looking between your feet at a thousand foot drop brings home the precarious nature of the situation and suddenly vertigo becomes very real, as does disco-knee. However, I realised I had no option, so overcoming my fear down we went.

I have never been so afraid. I realised just how vulnerable we were perched so high with a few millimeters of metal of the crampons and an ice-ax for purchase. Dropping about one-hundred feet, we traversed across and continued on up. Climbing up was less fearful, but after the recent scare my heart was beating for England!

The next heartache came near the summit. Andy had to borrow my ax whilst I sat inside the ledge beneath the overhang of ice. The view was incredible but very, very scary. Andy chipped at the cornice, making a tunnel for us to crawl through. He held on with one ax and chipped with the other. We managed to crawl through and upon gaining the summit we swiftly realised that we were standing on an overhang of ice a few feet thick and beneath that was a sheer drop. We moved very swiftly on to solid ground.

What an experience and what a tale to tell. Losing a contact lens and reinserting it on ice pitch. Incredible, but not for the feint hearted. 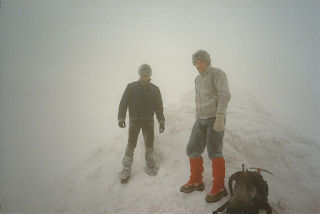 Andy and I in a White Out (Ben Vrackie I think). Andy looks cold!