The Reality of Fighting in a Fantasy World

OK, most weapons in fantasy tend to be swords, axes, spears etc. My experiences are in Saxon/Viking reenactment and although it's clearly not a real battle there are parallels that can help you visualise the true brutality of fighting with these types of weapons, and to be honest, it's pretty grim.

Given that most opponents are armoured, fighting becomes brutal and the aim is to break bones rather than pierce the armour. It's also a bit of a scrum as shields make the use of swords and spear very difficult to use effectively. In a scrum though you don't have to watch out for someone lying on the ground stabbing at your unprotected favourite bits with a knife. Your feet also become an easy target. The shields themselves become a weapon and on occasions someone has bashed my shield so that the rim has hit my face and that can really hurt and momentarily distract you.

Spears are horrible. Often you face an opponent but then a spear from someone else lances across several feet and catches you in the gut or chest. A spear has a better chance of penetrating chain mail so this is a real threat. That a spear can come from any direction is another real threat and makes fighting incredibly hard. Spears can hit virtually any part of your body so speed of response is vital. However, lower your shield and you open your vitals to other weapons.

Occasionally I have faced arrows and again this is a nightmare as again they can come from anywhere. If fired in a volley, high into the sky then raising your shield will protect you (in most instances). It is the lone, predatory archer that is more of a worry. Again, if you have faced off against a few opponents you may not be watching for an archer to one side.

As to the reality. I have broken fingers and ribs in my clashes. Weapons are blunt but still very effective. What is missing though is the blood, gore and screaming. Apparently battlefields were misted with arterial blood. Imaging a mist of warm blood and tasting it on your tongue. The ground would become slippery with blood and gore, making every step a nightmare.

Many of us enjoy reading fantasy but the reality of a medieval battle is far from what any of us can visualise. It also makes it harder to imaging a true hero when so much depends on luck, a chance spear thrust, a slip on a bloody patch or an arrow in the face. Brutal times and usually a brutal end. 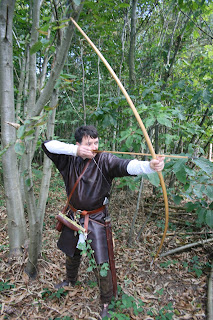