OK, I actually quite liked this. It was nonsense but it was also fun. As a series it improved over time. It's a shame the second series is cancelled as I think it would have improved again.

I never liked the original Jekyll and Hyde premise so I was relieved this was different. There was a host of very strange creatures led by Captain Dance, a thoroughly nasty character with a very strange torso; no skin and a beating heart. Tom Bateman was interesting as Jekyll (and of course Hyde). The difference from the usual tale was rather than drinking a potion Jekyll has a genetic defect and turns into Hyde when angry (rather like the Hulk, but less green)

The main problem with the series was screening it before the watershed. Some monsters were very macabre. It seems a common practice, after all Dr Who was screened in prime time and much later than it used to be, so no wonder children have not been watching it and ratings have dropped. 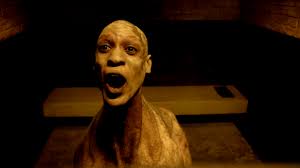