My experience is in fantasy and I would think that and science fiction are the most difficult genres to create your own world. Having said that, a problem for many writers in some other genres is conveying their world appropriately and a few books that I've read in the historical fiction genre failed to convey living and breathing in the past. It's an interesting point to explore why that happened and that may give you tips on building a realistic world.

1. Language. Some historical fiction writers don't manage to achieve a sense of being in the past Talking in Latin is a step too far and wouldn't be expected, although a smattering of historical words here and there are essential. For example naming weapons such as the gladius or pilum), and using appropriate names for their familiar surroundings (that may not be familiar to us) such as viaduct, and forum, to mention a few. Even getting a few words right though cannot sometimes convey the world correctly. Stephen Saylor did an excellent job describing a drop of water falling onto a riders neck as he left Rome. Looking up he saw moss on the stonework at the point of the leak. That description really takes you to Rome. For fantasy and sci-fi authors, in a previous article, I spoke about creating names and trying to make them sound sensible. creating names This is harder than it sounds. Some genres get it spot on and Star Trek is a great example, Warp speed for example is likely to be adapted to breaking the light barrier should it happen. So, create your own words and use them to describe ethnicity (e.g. Elves, Dwarves, Alvalah), creatures, weapons etc, but make them sound right and remember that just naming them doesn't bring your world to life..

2. Culture. As I said, language alone doesn't solely build a world. So why do some historical novels do well and others don't? It's because they simply don't achieve a connection with the past. You need to pick on a few really crucial aspects of your world and build them into the story. For example, in Roman times people believed in the gods. They would usually not do anything without a divination. Some authors fail to include that and this omission can be felt by a reader. It is as though a link has been broken. In fantasy and sci-fi writing, it's important to have some sense of culture that is different to ours. Some authors have borrowed heavily from our past and in some sense that can be appropriate and helps achieve an identity that everyone can relate to. Avatar is very similar to the Pocahontas story and the creatures of the planet are very similar to Native Americans. And why not? Their culture is primitive and their weapons are bows and arrows. Joe Abercrombie world is closely associated with Mountain Men. That adds realism and why shouldn't people living in the mountains have the same fears and face the same problems independent of their world. So you can adapt culture from our history, but add a few changes perhaps. You need to include this and build on it in the story. Once again though, the person in the narrative has to live that culture rather than using a few words here and there. You do not offer a libation to the gods, you stand by a river and search for a horse-shaped pebble and sprinkle wine over it. Looking up in the hope to see a sign that your offering is approved. A rook cawing may make you feel that it has, or ay send a shiver down your spine. You need to find a bridge.

3. The Environment. Again, some authors in historical fiction fail to build on this and hence lose the sense that you are actually living in the past. Imagine a Celt arriving in Rome for the first time and seeing the buildings and most importantly the Colosseum. That is a wow factor that really tells the reader that he is living in the past. Bring home the environment; that's the buildings, the roads (or lack of them), the forests etc. What is really important is to describe how people feel in these environments. Romans in Syria would complain about the dust and sand in their sandals (is there a link there? Sand - SANDals?). They would be hot and thirsty. The person needs to live in their environment and you need to make the reader believe that. What makes that environment different to ours, that may simply be the lack of air conditioning. For many readers being in a desert may not conjure up the real problems of actually being there. Add in a few gods from their culture, like not crossing a river/desert without a gift to some lesser god, and the tale becomes believable. Describe their feelings walking, say, through a run-down, mud brick house with a cooking fire still smouldering in the middle of the room and the smell of stale smoke hanging in the air. Show how their environment is different to ours.

4. Living. You need to explore how people live. Again historical fiction is a good example, Romans reclined on couches when eating and death was common place, therefore, life was cheap. I have separated this from culture as that section gets over long otherwise. Don't fall in to the trap of over describing food for example and do not give over-long lists. You can again borrow from our past and have people living in tents, being nomadic, being tribal etc, but consider what that means and describe how that makes life different. It is that that peaks the readers interest. You need to decide how people live and how they fight. Fighting is easy -- if the people have swords and bows then their defences will be appropriate to those weapons. If they have gunpowder, then people will adapt and you will have forts rather than castles. Do they ride horse, dragons or grakyn? Whichever you chose, they need some form of saddle perhaps, reins or some other control, stables, feed etc. The more you add, the more believable the world, but drwa a balance and don't over do it.

5. The Enemy. We are now straying into the plot which I describe in Creating a Plot, but we are still world building so it is worth mentioning here. The enemy need their own language, culture, environment and lifestyle. Are they creatures (Orcs, goblins etc) or are they people of other nations. Even in fantasy you don't necessarily need fantasy creatures and many authors (e.g. George Martin (up until the point of dragons of course)) create worlds where conflict arises simply because of ambition or cultural differences.

An interesting point for fantasy and science fiction writers is there is a lot of choice. You can create unique worlds by simply mixing and matching any number of the above items. As an example, your people could be blind, living underground and worshiping worms. Whether such a tale would work is up to you and although I made this up at random - if you've read Duncton Wood you will see how an author did make the above example work.

An example of my world, Demons, Grakyn, Dragons and Death Knights. A world of fortified cities, superstition and fear. 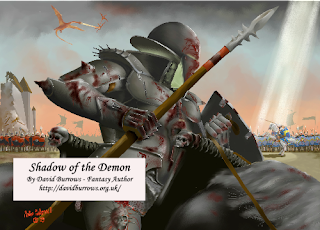