The series is based on Bernard Cornwell's books, so how well does it do as a TV series? The plot line is excellent and fairly close to the book. That's good as the books are a success and popular. It follows the tale of a young Saxon boy, renamed Uhtred when his brother is killed. Uhtred is captured by Danes and because of his plucky spirit they spare him and he is raised as a Dane.

If the series continues to follow the books it will be pretty good. England at the time is close to defeat and Uhtred plays a significant role, helping King Alfred. Bernard Cornwall always has a twist. In Sharp it was having an officer raised from the ranks that others didn't see him as a gentleman and therefore an officer. In Rebel it was a Northerner joining the Southern cause and again not being quite accepted. Here, Uhtred is never really trusted as he is a pagan (being raised by Danes) among some of the most god-fearing people of the time. It makes for an interesting clash of personalities.

However, there are some glaring mistakes. The interpretation of a shield wall is all too wrong. It may be that this first adaptation was unique to the first battle. In the scene the Danes form a three wall tall shield wall with no gaps and men crouching at the front to cover their feet. This is fine against arrows, but against another on-foot army it wouldn't work. You simply wouldn't have the numbers and the enemy would just outflank you. 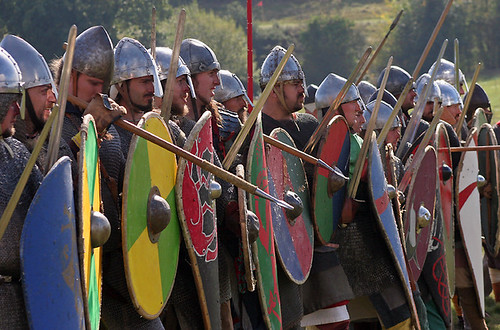 The battle is more fluid than a static wall of several layers.

Let's hope that the Last Kingdom changes battle tactics in future episodes, otherwise two armies facing each other in a shield wall would be very dull indeed. Otherwise, a very interesting programme.
Posted by DavidjB at 08:13