Do We Need Fantasy When We Have This

A snake eating spider!! I like the imagination in Fantasy but sometimes you don't have to look too far. This is horrible.
Posted by DavidjB at 10:58 No comments:

What I Look for in a Fantasy Book

I have read a few books recently that have been difficult to get into. What I like in a fantasy book is:

1. Readability. The language has to be pitched right and easy to read. Some books are incredibly engaging just because they are so well written, however the book does need a plot as well. Brent Weeks tells a masterly tale and his Night Angel series was excellent. I found his Lightbringer series much harder to read and the plot seemed to have thinned somewhat. A series that suffered that fate was Robert Jordan's Wheel of Time. I read up to book 9 but couldn't finish that book, so skipped 10 and 11 and rejoined the series for the final few books. Strangely I don't think I missed much.

2. Over use of names. Some books start with 10 new characters and loads of place names. This just gets confusing, especially in the fantasy genre where names such as Cauliflower Wibblewobble are common. It's hard enough with Jim, Jane and Edinburgh which are of course all familiar. I am amazed at how well George Martin tackles this very difficult area. Not many people can do that and even in history books, stories quickly become difficult to follow. George Martin does it so well that I have never had to consult his annexes showing family trees etc. If it is done well then there is no need.

3. Tales need to be believable and within bounds. It's too easy in fantasy to save everyone with a spell that defies belief. Spells are not normal for us, so magic in general is difficult to believe in. There has to be a framework to make the magic believable. In Lord of the Rings, Gandalf casts few spells and one such spell was blocking a doorway to prevent a Balrog access. Blocking a door seems feasible and so can be believed. Gandalf blasting the Balrog into oblivion wouldn't have worked anywhere near so well. Vampire tales are a good example of this, the rules for a vampire are set out and although they vary slightly from author to author - there seems to be a consensus as to how vampires behave and what they can and cannot do.

4. The tale needs to flow and pull the reader gently along like a ride on a river, rather than a series of unconnected waterfalls. I occasionally find myself reading meandering plots that seem to have no direction and as such I do occasionally give up on a book (which is maddening).

5. The reader needs to understand the character they are following to the point where they care whether they live or die. A few books I've read recently have left me hoping characters might do so some sort of plot might evolve. A great tale for characterization is Stephen Donaldson's Lord Foul's Bane. In some ways the hero is to be despised and yet you want him to succeed. Druss in David Gemmell's Druss the Legend is an old man and yet you believe in him and want him to win every battle. Heroes need to be fallible as well as...well, heroic.

Conquest by Stewart Binns
My rating: 3 of 5 stars

Interesting account of the life and times of Hereward the Wake.Very nicely written with the lead character being larger than life and the ultimate warrior. The tale is a little of a history lesson at times, but is worth reading as this is an interesting period of history. It is told well before The Conquest, following Hereward's exile as a teenager and journey across Europe and beyond, learning the art of warfare. Duke William is interestingly portrayed and given his many deeds, his characteristics seem spot on. Overall, a good read and fills an interesting knowledge gap. Some interesting links to the later legend of Robin Hood 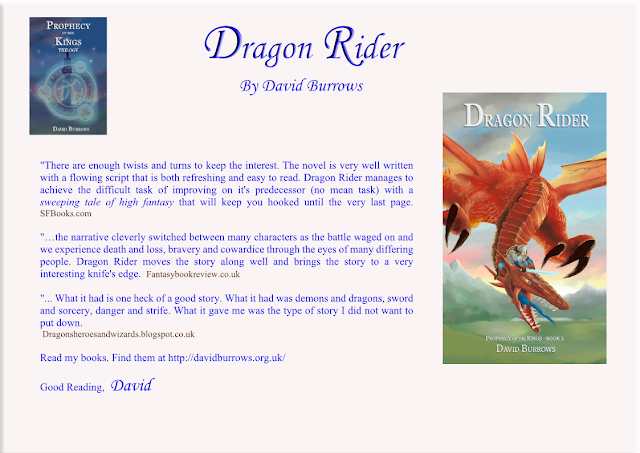 A Book Review: The Sacred Bones by Michael Byrnes

The Sacred Bones by Michael Byrnes
My rating: 3 of 5 stars

Nicely written and very entertaining. Sometimes you keep reading to discover when the experts in the book will cotton on to what you have already decided is happening and this was one of those books. The plot was fairly obvious but the author kept you interested and there was a sprinkling of thriller thrown in to keep you turning the pages. The title sort of gives the plot away as well. I liked the DNA analysis and the conclusions that drew and felt that was quite a good portrayal of the bones' owner. Definitely and interesting and lively read. You are left wondering whether something more could have been done with the plot, but in reality anything else would have been a world-changer.