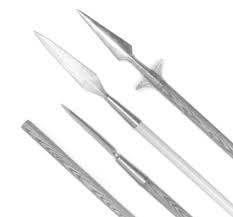 Spears are often overlooked, but are formidable weapons. They have been alternatively long and short. Hoplites used them to good effect in Greece but a long spear is vulnerable to a flanking attack. The English Civil War used really long spears aimed at keeping cavalry at bay. I tried one once and it was very unwieldy. I prefer shorter spears and single handers are quite useful. Two spear-man can take out a swordsman if they know what they are doing.
Posted by DavidjB at 17:57