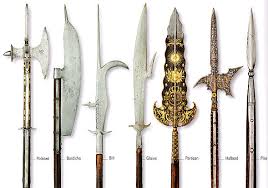 Fantasy novels need some realism and finding weapons for novels can be straightforward by looking at medieval weapons. The spears I showed last time were fairly standard. By medieval times they had become much more fanciful. Some were still fairly plane - just a standard spear. Others had hooks and axe like heads.

In battle, anything goes. Hooks might help to penetrate armour at vulnerable points, e.g. back of the neck, or may be used to pull a shield down, although in medieval times shields were quite small. Hamstringing a horse is another possibility but if the horse is coming towards you that seems unlikely. Pulling a man off a horse - possibly. A hook would snag on any joint in the armour and could be used to pull a man from a horse or topple him - if he is on foot.

Sometimes, we can only guess at a weapon's use. there's little doubt though that by the medieval period weapons were fanciful and very brutal. By the English Civil War, many training pamphlets survived and it clearly was brutal work and any part of a weapon could be used. Sometimes swords were reversed and used as a club. The fighter clearly had to have gauntlets otherwise he would rip his hands to shreds.

One thing is clear - battles are brutal places
Posted by DavidjB at 18:54