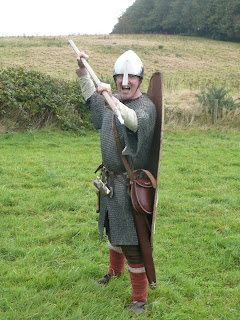 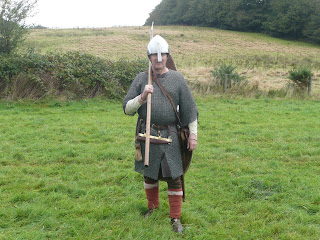 This is me before the battle. After the battle I was covered in mud and clearly very dead. The Saxon left wing was drawn off Senlac Ridge into a Norman ambush. This year there wasn't as many cavalry as in 2006, so we held our own and I actually managed to run back o my own lines. Not bad carrying all the armour, shield etc. Heavy stuff. Marvellous for a writer to take party in an event like this though. You really get an experience in a shield wall, especially facing cavalry and archers. 2006 was amazing as there were 100 cavalry. Along the line from me a horse failed to stop and hit a man who was thrown 20' out of the shield wall. Not surprising given the mass of the horse. A previous time a horse stood on a friends foot, breaking his toe. Very wet this year though and the wettest yet. Previous battles have been in warm October sunshine. This was so wet when you stood still a puddle formed around your feet. Another big event coming up n 2016!