Wow, what can I say. I really enjoyed it. It was brilliant meeting Brent Weeks and Joe Abercrombie. My son is very much a Brent Week's fan whereas I like both authors. Mind you he hasn't read Joe's books yet! Both are very gritty writers. But, what nice people. We heard both giving readings in a very pleasant and personal environment. They both gave stunning performances, but Brent had a very brilliant twist to his. It was all about Spoilers so I can't say anything here in respect to the great man, but it was awesome and had his fans groaning in a mixture of disbelief and frustration.

The event itself was also brilliant. Very few fans though and rather a lot of authors and publishers. There were book signings by lots of different publishing houses. Reading by authors, freebies etc. Great mixture of characters. I met some really nice and genuine folk. Chris of Pendragon Press, Terry from Exagerated press.

The venue is also interesting, Brighton. However, it's a tad expensive. Brighton is always lively and probably would have been better if we'd know our way around better. The pubs, hotel and especially parking were all very expensive and probably explained the absence of fans. 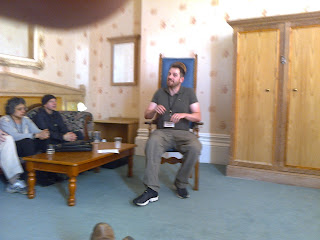 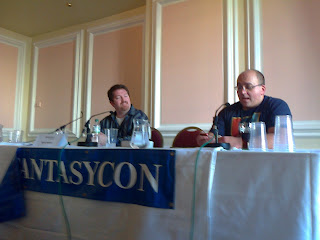 Overall though - an amazing experience.
Posted by DavidjB at 13:40