One of my favourite scenes in the films of Lord of the Rings is Sam's speech towards the end of the second film, where he talks about heroes having the opportunity to turn back. It alludes to the tales in the Silmarillion, Beren and Luthian and others. It's a really nice scene and very poignant.

The other one I like is again at the end of the second film, where Gollum is cursing the hobbits, wringing a branch as though it's their necks. Gollum is gaining control over Smeagol. It's a cracking scene and leads into the music, Gollums song. Brilliant.
Posted by DavidjB at 10:56 No comments:

Guess where this is? 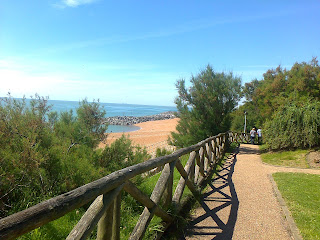 This looks really exotic, doesn't it. And surprisingly it's Folkstone. Really nice place for a walk by the seaside.

Heyho - It's summer. I've reduced the price of the Prophecy of the Kings - Omnibus Edition on Amazon, Kindle edition. Check it out!

Don't forget that Prophecy of the Kings comes with a good pedigree. Gold award winner, book of the month and three fantasy sites giving it good reviews. Read it for summer.

Check out the reviews on http://prophecyofthekings.com/reviews_prophecy_kings.html

David
Posted by DavidjB at 09:36 No comments:

You know what fantasy fans? I really enjoyed this. My youngest son didn't want to see it. I think he was put off by how good the Tobey Maguire version was, but the new version is very entertaining nonetheless. http://www.theamazingspiderman.com/

The CGI just gets better and better. The villain is good and believable in his own way.

It is a similar tale to start with to the Maguire version and that could feel tedious to some, but it really gets going and is good value. Well worth seeing in my view.
Posted by DavidjB at 17:23 2 comments:

What have you learnt today?

I just learnt not to drink beer and then expect to run 5 miles!
Posted by DavidjB at 15:26 2 comments:

I have really enjoyed working on Drachar's Demons. The characters seem to be really coming alive. Check out the post below and let me know what you think. I'm happy to take advice on the character development of my new fantasy novel, second edition.

For those of you who have read Prophecy of the Kings let me know who your favourite character was and the reason. I'll give away a copy of Drachar's Demons to the best post. 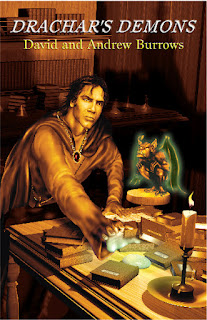 I do hope those who have read my novels have enjoyed them so far. Like my facebook page please and help me to spread the word. Fantasy rules. http://www.facebook.com/pages/David-Burrows/285259951541336
Posted by DavidjB at 12:04 No comments: