Ouch. I just sat down and worked out how much Tax we generally pay in the UK on our hard earned money. The tax burden has always been bad in the UK but it has grown beyond all proportions. If I include national insurance, and then include 20% VAT on pretty much everything I buy (excluding Cornish pasties - thanks George), council tax and taxes on fuel - I calculate that I pay over 50% in tax. Half my pay gone! All those folk out there that are bitter about UK government suddenly deciding to reduce pensions because of austerity measures need to factor in that we pay over 50% in tax. I'm a little surprised the Unions (NUT, NASUWT) haven't latched on to this fact!

How do other countries fare?

It's a good thing fantasy novels exist to take our minds off the mess that politicians leave behind!!
Posted by DavidjB at 16:18 No comments:

The Hobbit - a review

The Hobbit will soon hit headlines when Peter Jackson’s films are completed, but what about the book? In my opinion it’s a tremendous read and fits snugly before Lord of the Rings, paving the way for the darker and more serious novel. However, I recently spoke with one of the salesgirls working in Waterstones; she is a real fantasy fan and yet she couldn't get into The Hobbit. To me this was absolute sacrilege, but thinking about it later I realised many folk may be in the same position, so I started to wonder why this book had made such an impact with me.

I admit that the beginning of The Hobbit is a little child like, as Tolkien introduces the concept of hobbits and of course Gandalf, but it is well worth bearing with it. Although jolly to start with there’s a really dark side and, as with all Tolkien’s work, the tale has a depth of beauty about it.

As we know, Tolkien created his worlds well in advance of publishing his works and that mammoth background allows Tolkien to hint at great heroes and villains spanning many millenniums. The beauty of Middle Earth is the sheer depth of its history and the very far reaching nature of the different and often conflicting races. So many fantasy books have elves, dwarves, wizards etc but Tolkien was the master craftsman who brought them to us first. His deep love of Norse language, life and mythology drove his inspiration and these tales with their magical rings and fairy creatures formed the basis of a huge undertaking in his own literary career.

The Hobbit is no exception and the characters are well crafted and the names are brilliant with even a little humour. For those who have seen Lord of the Rings, or read the books, The Hobbit is a must. Bilbo Baggins is a mere youngster in this tale and far from the hero he later reminisces on. At first he is more a bumbling character whose only thought is for his next meal or better still an after dinner snooze. When Gandalf arrives with tales of heroes and villains, Bilbo is initially spellbound, but then his more serious side intervenes and he does his best, without being rude of course, to get rid of Gandalf. This sets the scene for a grand adventure that sees Bilbo grow in confidence whilst his waist line shrinks.

Mirkwood is a brilliant creation with its dark and sinister heartland; a minor woodland compared to the great Fangorn Forrest, but there are still so many surprises in store for our intrepid travellers. For me the elves are the real enigma to this tale and the way Tolkien portrays them is marvellous, with the various types such as woodland, dark and high elves. Again there is a playful side to them, but there is also a very serious side when needs arise.

I absolutely loved Lake-town. Tolkien uses so few words to describe it, but somehow it leaps from the pages and sets the scene for the epic battle with Smaug, the dragon. Dragons were the creation of the First Dark Lord, snet by him to plague the Elves and bring down their cities. Smaug is the last of his kind, but of all the dragons I have read about he is the most dragon-like. Somehow Tolkien creates the same feeling about Smaug as he does with the Mines of Moria in Lord of the Rings; a sense of antiquity and the unknown, like walking into your grandmother’s house and seeing objects from a long-lost era.

I am really looking forward to seeing the Hobbit on film, but you cannot beat your imagination. No doubt Smaug will be an amazing CGI creation, but your imagination is far more vivid and I would highly recommend reading the Hobbit prior to seeing the films. It is the feeling that the words inspire that a film cannot achieve. Meet the cast but first create your own world, in your mind’s eye, for that is the beauty of fantasy, it is mystery shrouded in the mist of the author’s telling and for that Tolkien is the Grand Master. The Hobbit moved me as a teenager and definitely influenced my own writing and I hope you enjoy it as much as I did.

With Peter Jackson's films coming up soon, what are people's anticipations on this book? My own are high, I loved this tale and especially the feeling of the unknown that Tolkien somehow manages to create. I remember being aged 7, telling ghost stories with friends and scaring ourselves silly, as if goblins, banshees and dragons really existed. For me Tolkien is just that, a sense of wonder at the unknown.
Posted by DavidjB at 15:51 No comments:

Reviews, where have all the reviews gone!!

Quiet week on the reviews front. Quiet week generally. Mind, the weather doesn't help. The last review for Prophecy of the Kings was Risingshadow.net web site. If you haven't had a look at the review or the site before, check it out. It's s goldmine of information for fantasy and the chap who runs it, Sami, is really nice. He's sent me photos from Finland which is really cool. It looks as wet as the UK judging by the high water mark of the  river. 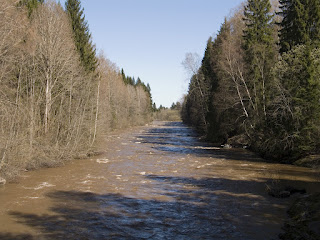 Like the other films in this series, this is a very entertaining film. Lots of embarrassing moments which is the films' trademark. I still prefer the second film which remains my favourite, but this is still very good. There's lots of nostalgia and in some ways I feel I've grown up with some of these characters. Stifler is my favourite. By far the funniest character and you also feel sorry for him whilst also rooting for his latest escapade. Great stuff.
Posted by DavidjB at 09:38 1 comment:

Cruise food - and lots of it

Read an article recently saying to expect to put on 1 lb for every day on a cruise. I can believe it. Food is very plentiful and some restaurants 24 hours! Food is also very good. I must have been good though - lost 2 lbs, went to the gym frequently!!
Posted by DavidjB at 17:36 1 comment: 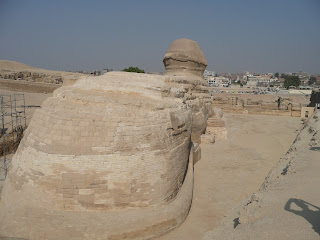 I really enjoyed seeing the Sphinx and Pyramids. At the base of the Spinx where the stones were buried for a long time, the stones are in an amazing condition. It shows how good the Egyptian stone masonry was. Not a view folk often get, of the Sphinx's butt!
Posted by DavidjB at 13:12 No comments:

Decided I need to lose weight. Ran 5 miles in the park today. It's like winter. Horrible. Ran 5 miles last Saturday and aim to do an additional 3 miles in the week. The only question is how long will this last? The park has been renovated and there is a new path which is good, and a nice waterfall into the lake. Marvellous. Just have to dodge the dogs that sometimes like the look of my ankles! :)
Posted by DavidjB at 13:06 1 comment: