First Time on a Cruise - Egypt

Back from my cruise around the Red Sea. Saw all the sites and sounds of Egypt, and the smells! Saw the pyramids and was hassled by the local sellers. They were dreadful. Fortunately the guide warned us of their tricks. They would offer you a free gift and then pursue you relentlessly for a "gift" back. The trick is not to accept the gift in the first place or to place it on the ground and walk away. Some of them got very angry though! They targeted the older tourists, obviously hoping they were a soft touch. One chap was threatened when he went to rescue his mother!

Pyramids were amazing. Loads of ruined buildings around them and I hadn't appreciated how close the Sphinx was. A tour guide was still trying to convince us the Egyptians couldn't have built the pyramids. According to him 2 million people built it, so how could they be fed? Also it's impossible to float 30 tons rocks on the Nile. Eric Van Daniken has a lot to answer for!! Egyptology has come a long way over the years so it's a great shame to hear this nonsense spouted.

Petra was very interesting. You follow a chasm in the ground surrounded by rock. That in itself is inspiring. A water channel cut into the rock takes water from reservoirs down to the city. I hadn't realised that Petra was mainly tombs. It's an amazing place.

The Valley of the Kings, Hatsheput's tomb (first female Pharaoh) and Karnak were the best though. Karnak itself is amazing with some hieroglyphs looking as clear as the day they were carved. My wife was brilliant for letting me go. :) 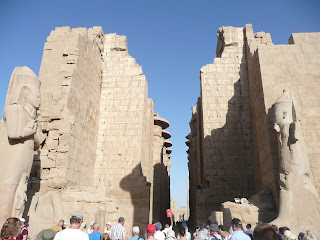