It's been a good week. I gave away 650 ebooks of Drachar's Demons. Not sure how that compares to other promotions but it seems good to me. Thanks everyone for taking part. Hope you all enjoy it.

Drove to Bristol and back today. They closed the Motorway but I managed to avoid hold ups. :)

Anyone recommend War Horse? I can feel an outing coming on.
Posted by DavidjB at 19:11 No comments:

Hurry, while the offer lasts.

Great reviws to date so don't miss out. For those with a copy. Let me know what you think.

David
Posted by DavidjB at 19:46 No comments:

My new novel is free from today - but only until Sunday 15th Jan. Help me create a buzz! Passs this on to all fantasy fans.

Drachar's Demons is free to download for Kindle users. Please visit Amazon to get a free copy from Friday 13th January until Sunday 15th January  - only

Please review your copy. It is a fantasy novel so it's really for fantasy fans.

David
Posted by DavidjB at 19:58 No comments:

Drachar's Demons has just had another great review.


4.0 out of 5 stars Action packed adventure,

By
kehs (Hertfordshire, England) - See all my reviews


This review is from: Drachar's Demons (Paperback)
Wow! I was lucky enough to be given a copy of this book by the author and am so pleased to be able to say I loved it. I was drawn into the adventure from the opening pages. What's not to like! There's magic, elves, sorcerers and demons woven into a magical tale about a fight against evil. I thought this had all been done before but Burrows has created his own world and people and I thoroughly enjoyed the read. I highly recommend Drachar's Demons. I just wish I was as eloquent as the author as my words do not do justice to his book.

HURRY. There's a massive 25% off my books at http://www.lulu.com/spotlight/jdavidburrows until 31st Jan only. Use the coupon code LULUBOOKUK305 to get the discount. There may be a limit on how many people can qualify for this so be quick.

Pass this on to all fantasy fans, please. You can use the voucher on any of the books in the Prophecy of the Kings trilogy or Drachar's Demons, my brand new book.

David
Posted by DavidjB at 18:51 No comments:

Brilliant reviews - thanks and keep them coming

Great reviews from Amazon.com. Many thanks. Don't forget the FREE kindle ebook of Drachar's Demons from the 13th January 2012 for 3 days - only!!


This review is from: Drachar's Demons (Kindle Edition)
Ok, so I actually had to read this, then put it down for a week and then read it again. There is so much going on that I felt I might have missed something. Which is AWESOME!! I really enjoyed reading about Drachar and I appreciate the opportunity to read it and review it.

Drachar is an outcast Eldric on the hunt for ultimate power. Along the way he uses Demons and the demon world to assist him, as well as unlikely allies such as the Krell. The rest of the Eldric have to do things they find distasteful to try to track him down and stop him. The Eldric will never be the same again either way!

It is a wonderful prequel to the "Prophecy of the Kings" books!!


This review is from: Drachar's Demons (Kindle Edition)

"Drachar's Demons" by David and Andrew Burrows is the intriguing prequel to David Burrows' `Prophecy of the Kings trilogy'. The origin of the evil Drachar is detailed in this sometimes chilling fantasy tale that describes the Eldric as they discover the powers and uses of the previously shunned demons. Lothanal, an ambitious sorcerer, discovers that unimaginable power is available through alliance with demons who can be conscripted with the promise of souls. One man's actions may be enough to overthrow the entire Eldric society as he pursues power to the exclusion of any consideration of appropriate morals. His former colleagues will have to learn concepts that have previously been considered anathema to their entire race and unlikely allies will be needed to combat the actions that threaten to destabilize the entire region. Beings and defenses formerly believed to exist only in legends will need to be utilized to combat the threat initiated through the actions of a single sorcerer and the lives of the Eldric and their neighboring kingdoms will be forever changed. The overwhelming odds faced by the brave defenders of the lands may be unsurmountable if they cannot find a successful defense against the demons who want to overrun the world.
Posted by DavidjB at 19:05 No comments:

My new book, Drachar's Demons, is being promoted soon and for 3 days will be free on Kindle, as an ebook. Check it out between the 13th to 15th January.


Drachar, banished by his own people, forges an unholy alliance with the demons by offering them ten thousand souls, but the demons demand one hundred thousand and without quibbling Drachar accepts. Only all out war will deliver so many souls and the old enemy Trosgarth is his only potential ally, but he must cross the land to confront their king and persuade him to his cause. Drachar has the power of the demon world at his command, but madness threatens when the demons plague his dreams, demanding souls.


His people, the Eldric, realise that they must learn to combat the growing threat by summoning demons themselves to exploit any weakness they may find. However, it is an exceptionally brave man that confronts a demon let alone tries to kill one. Their scales are impervious to blades and any mistake results in the demon claiming another soul for eternal damnation.


The race is on for war threatens; a war like no other for sorcerer will battle sorcerer and demon set against demon. 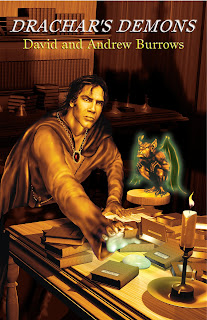