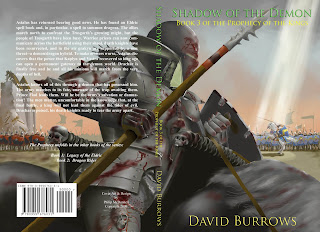 Nearly completed the second edition. This has new book covers. Phil has done a tremendous job and I especially like book 3.
Posted by DavidjB at 09:12 1 comment:

I'm working hard on a second edition. I'm excited over the new book covers which are currently in draft. Coming soon, watch this space...
Posted by DavidjB at 11:39 No comments:

Many thanks to those folk who posted reviews on Goodreads. Some very good reviews so far and it's very much appreciated. Thanks to you all. I'm looking forward to any more postings, good or bad. Check them out at http://www.goodreads.com/book/show/6019725.The_Prophecy_of_the_Kings_Trilogy

David
Posted by DavidjB at 11:26 No comments:

The librarything competition ended yesterday and today I sent the books to the selected winners. As a bonus I have sent the full trilogy to some folk so an additional congratulations. I hope you enjoy the books as much as I have enjoyed writing them. Be patient with the mail, it may take until the 21st May to receive your copy.

David
Posted by DavidjB at 16:56 No comments: 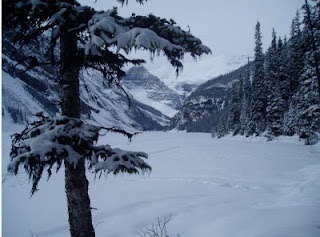 For fun I'm running a photo and fantasy artwork competition. I've put some extracts from my three novels in the link box below. Have a read and if any of the locations or scenes described match a photo you might have (mountains, woodland etc) or artwork, post them here or email them (if they won't post) to legacyoftheeldric@blueyonder.co.uk.

Above is a possible view of Ban Kildor (a mountain from book 1)
Check out the excerpts at http://prophecyofthekings.com/Companyofwolves.htm
David

David
Posted by DavidjB at 18:39 No comments:

The Prophecy of the Kings - a Review by Lee at fantasybookreview.co.uk

Long ago the Eldric mysteriously disappeared from the land, shortly after the Krell Wars when Drachar’s shade was finally banished from the world. Perhaps they believed the threat was gone, but in leaving they took with them sorcery, the only effective means of defeating demons. Then came the Prophecy and only one thing is certain in the cryptic lines, Drachar’s shade will one day return. Against this backdrop three men seek what became of the Eldric. One man, Vastra, recklessly ambitious and driven by greed for power, harbours a secret and will kill to protect it. His companions, Kaplyn and Lars have their own reasons for helping, but who will succeed?

If you have having a bad day, or worse still a bad week then a fantasy book can come to the rescue - no other genre can offer the complete escapism that fantasy does. Legacy of the Eldric, the first book in The Prophecy of the Kings trilogy by David Burrows is a book that offers this escapism; within its pages is everything that a fantasy fan needs to allow them to let their imaginations soar free.

There are three main characters - Kaplyn, Lars and Vastra – and they are good, strong personalities. Kaplyn is noble; Lars is a rough diamond and Vastra provides the sinister element - the character you do not know if you can trust or not. David Burrows is a big fan of The Lord of the Rings and the friendship between Kaplyn and Lars can be seen as an affectionate tip of the hat to that of Frodo and Sam, both feature the same traits that so endeared the two hobbits to readers worldwide. The extract below shows Kaplyn’s second impressions of Lars shortly after he had saved him from certain death at the hands of bandits:

Legacy of the Eldric is written in the third person although an argument could be made that it could also have made an excellent first person narrative with the reader experiencing events through Kaplyn’s eyes. The settings were vibrant with two locations in particular standing out; the magical ruins of Tanel and the majestic forest realm of Gillfillan:

David Burrows’s interest in fantasy began with The Lord of the Rings. Inspired by the epic tale he put pen to paper, determined to create a story with bold characters and an intriguing plot. In Legacy of the Eldric he has certainly achieved his aim; the characters are memorable and the plot is fast-paced and exciting. It is an opening chapter in a series that I look forward to reading the mid and end parts to.

This is solid fantasy; exactly what a fantasy doctor would order for those looking for an enjoyable escape from reality… fans of Tolkien, Hobb and Moorcock will love what they find here. Definitely recommended.
http://www.fantasybookreview.co.uk/David-Burrows/Legacy-of-the-Eldric.html
Posted by DavidjB at 13:50 No comments: